So I’m starting to feel guilty whenever someone follows this blog because of my pop/K-Pop related posts – not only have I not been posting that much at all, but my music-related posts have been decreasing exorbitantly! So, I’m making amends for that today by writing some short stuff on Pop and K-Pop. This, obviously, is the K-Pop one.

I wanted to write about my favorite SM groups, but through Google I discovered that they had not released any new songs as of late. Therefore, it all fell upon U-Kiss, the only other group I’ve ever paid much attention to in my posts – and guess what, they did release a new music video recently! This one is called “Forbidden Love”, or as I like to call it, Pelvic Thrusts. You can watch the video here. 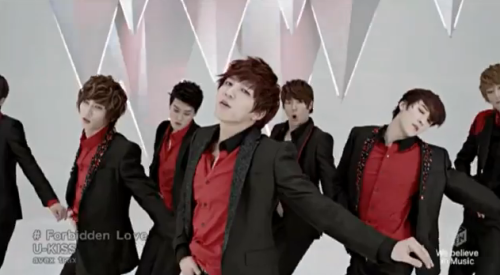 It took me five minutes to get this screenshot. Kevin's face is worth it though... I find it funny yet somewhat sexy at the same time. You're welcome, fangirls and fanboys.

Not much to say about this song, it’s similar to U-Kiss’s previous Japanese singles, “Neverland” and “Tick Tack”. It has a great dance beat and catchy chorus, which will hook people in who are clueless to the actual meaning of the song. As always, the video displays the group’s fantastic dancing, their not-great but not-horrible acting abilities, and a nice utilization of colors – red, black, and white together serves as a sensuous blend that enhances U-Kiss’s overall eye-candy appeal.

They also incorporate a small section of dubstep into the song around 2:35, at least it sounds like dubstep. Not sure if that was done intentionally or not.

Also, nice use of setting, as shown in the picture above. The thorny red cage thing emphasized the “forbidden” aspect of the song and the video, which was an above average move considering how many K-Pop music video producers thrust their groups (not their pelvises) into random, isolated areas… cough, “The Boys” SNSD cough.

Awkward mid-singing screenshot of Kevin and his new hair. It doesn't really do much for me, but I suppose it doesn't detract from his beauty either. I am not jealous...

What do you guys think of the song? If anyone could recommend me some new K-Pop songs in general that would be appreciated, particularly those of the workout/dance variety. I have been falling out of love with the genre as of late, but I am not willing to let go yet…

15 responses to “U-Kiss and Pelvic Thrusts… I mean, “Forbidden Love””