Review of SNSD’s “Twinkle” and “Paparazzi”

In order to take a break from my recent chain of personal posts and book reviews, I’ve decided to share my thoughts on two of SNSD’s latest releases: “Twinkle” and “Paparazzi”. I haven’t written a blog post about K-Pop/J-Pop since February, so hopefully this will make up for that, as well as provide juxtaposition with some of the other posts I’ve published!

Tiffany, Taeyeon, and Seohyun on stage in the music video of “Twinkle”. Notice the multiple ethnicities of the people performing behind them.

As you can probably tell, I have been out of the loop regarding K-Pop lately. Today, I went on a brief frenzy updating myself on my favorite groups’ activities for the past few months, and when I stumbled upon the fact that SNSD had experimented with a cleverly-titled subgroup, and that their debut single landed #126 on the Billboard 200, I was impressed. Of course, when I saw the name of the song itself, “Twinkle”, I assumed it would be another “Echo” – aka, not a good thing.

“Twinkle” proved to be worlds apart from “Echo”, or any of SNSD’s previous songs, for that matter. It’s got a R&B/reggae/soul groove going for it, and showcases the singers’ voices more than any catchy, hook-filled, purely pop song could have. The music video and the song both have a clean, well-produced vibe and sound, and the girls give the track a little something more with their attitude and vocal ability.

However, “Twinkle” falls short for me. It’s a good song, but not a great one. Its musicality somewhat unsettles me, in that there are too many awkward pauses that break up the melodious quality the song could have possessed. It’s anticlimactic, and lacks any meaningful passion or emotion. Don’t get me wrong, I don’t hate the song, but it’s only one I would dance along to if it were to play on the radio, not one I would take the time to download myself and dance to in my room. Which brings us to our next song… 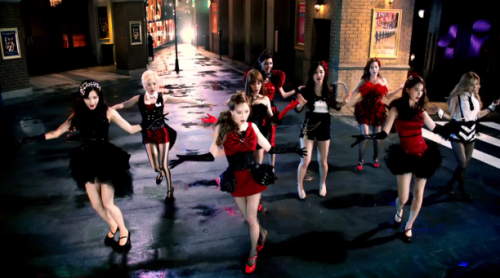 Pretty girls dancing in promiscuous attire on the streets! What could possibly go wrong?

Quite different than Lady Gaga’s “Paparazzi” – that was my first thought. Dang, dang, I wish I could curse, so I could say dam* – that was my second thought.

“Paparazzi” is such a powerhouse song, I’m surprised SM chose to use its strength for the debut track of their new Japanese album as opposed to saving it and somehow restructuring it into a Korean release. It isn’t as creepily cute as “Oh!”, but it isn’t as electronically auto-tuned as “The Boys” – I’d say it’s a perfect blend.  From the “oh la la la” in the beginning to the well-incorporated English in the chorus to the climactic bridge near the end, the song does not slip up. It’s poppy without relying on any overt hooks, and definitely danceable to. I doubt I’d be going to any clubs that would play the song (or any clubs in general), so, I’ll just have to resort to my bedroom. 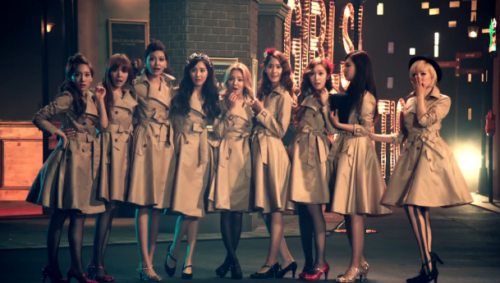 They know how to rock the trench coat and heels combination, that’s for sure. Perhaps I should a similar ensemble sometime… just kidding. Sort of. 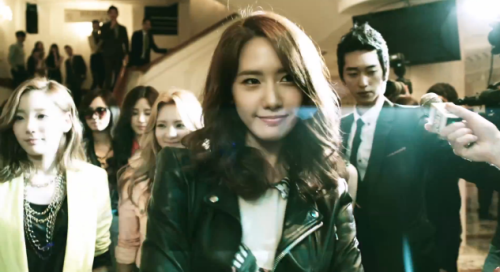 They also know how to pull off the “pretend-to-be-mobbed-by-paparazzi” look well.

SM made sure that the music video for “Paparazzi” pulled out all the stops. It’s sophisticated, sleek, glamorous, and gorgeous without looking overdone or cheesy. The slow-motion removal of their trench coats, the high-quality camera action capturing their more intricate dance movements, and the amazing architectural designs all impressed me. Apparently the set contained more than 30,000 light bulbs, the buildings took a week to prepare with 120 people working on them, and a total of 300 people were cast for the video – all of this effort was definitely not in vain. Also, I loved their outfits.

Dancing to pop music in a ballroom while wearing pink gloves? Must… resist… jealousy…

Did anyone else notice the newspaper headlines? I particularly like the one about flashing.

The dancing in the music video served as standard SNSD material. Lots of arm movements and some synchronized hip/leg moves, with plenty of spot transitions thrown in. Not mind-blowing stuff, but not bad, either.

Overall, I thoroughly enjoyed listening to and taking the time to get all the screenshots of “Paparazzi”. Despite some recently mediocre releases from SNSD, I think this evens it out for them, in my eyes. Not as boss as “Genie”, but, who knows, maybe their next song will be.

Thoughts? Agree or disagree? Do you find their outfits as attractive as I do?

12 responses to “Review of SNSD’s “Twinkle” and “Paparazzi””