Gay Rights and the Big Picture

I am aware that this tweet was taken before the election, it’s great that President Obama won!

Lately, I’ve heard a lot of people say that gay rights isn’t a “big picture” issue. They say that things like the economy or foreign affairs matters more, and that being gay only affects a limited amount of people – so, it should be shoved aside until our country can resolve other problems.

I understand that people have priorities and certain things that affect them. Everyone is supposed to care about different subjects, and people are supposed to disagree, otherwise, nothing new would arise. I understand that money has a huge effect on our country’s prosperity and its overall position in the world – it’s truly unfortunate that so many people are struggling to make ends meet.

But I do not understand how anyone can assume that gay rights isn’t a key part of the big picture. Clearly, people who say this have not been bullied, discriminated against a by a teacher, or called a “fag” as if being gay gave you some sort of disease. Clearly, these people do not have friends or family members who have suffered from unequal rights. Clearly, these people have never felt guilty or oppressed for loving someone of the same sex.

The symbolic meaning of marriage, to visit your loved ones when they’re sick, to be equal to every other human being – are those things not part of the big picture? If so, why do people bother to get married anyway? Why don’t we all just have civil unions with marriage benefits? It’s horrifying that human dignity has taken a back seat to money, a purely materialistic measure of man’s success.

And it’s not just gay people who are left damaged by unfair legislation and policies. Everyone is affected by this. Straight people who vote against a gay person’s right to live as freely and to love as equally as them are dehumanizing themselves, whether they’re aware of it or not. They are allowing their fellow man to flounder and fight for the rights they should be born with.

Oddly enough, I’m confident that very few would vote for money over the rights of black people to get married or to visit their loved ones in the hospital. The thought itself is inhumane and disgusting. Unfortunately, that’s exactly what is happening to gays – money and issues that seem to be prevalent are detracting from our country’s focus on social issues, making our morality stagnant and depriving citizens of what’s fair.

Even though this post might make me sound like I’m indignant, I’m really not. This past election, our country showed that it’s striding in the right direction. Obama, a supporter of gay rights, won the Presidential election, four more states will now allow gay marriage, and we have our first openly gay member in the Senate and openly bisexual member in Congress. Hopefully, when the Supreme Court argues DOMA, all of these victories will influence the justices’ decision. 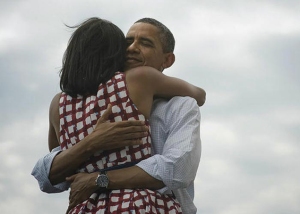 Does anyone agree or disagree? I’m definitely biased because I know more about social issues than I do about fiscal or foreign affair issues, but I do believe that gay rights and morality should be a predominate concern. Also, how do you guys feel about the election? Of course I was ecstatic, but I recognize that not everyone may feel that way. Now, I am off to volunteer – until next time!

9 responses to “Gay Rights and the Big Picture”