Before I begin my review of this book, I want to share the story of the first and last time I forced myself to throw up. While this doesn’t relate exactly to Unbearable Lightness, it sheds light on why I empathize so much with Portia De Rossi and what she went through. Skip down a few paragraphs if you wish.

In my first few years of adolescence, I always felt lost. I was born gay in a society where the word faggot is tossed around like footballs are thrown on Sunday, born homosexual in a world where my own mother prefers me dead than happy with a man. I couldn’t change any of this – all I thought I could do was struggle through school and maybe make a friend or two.

Couple that with the need to be above average. Getting good grades wasn’t satisfying enough, so I controlled and obsessed about the simplest, most natural thing: my body. Society couldn’t make a law about being too skinny or too fat. I was never dangerously underweight, but I loved to teeter at the edge. At the edge, I felt accomplished, not average. Here’s a quote from the book where she discusses “average”:

“Average. It was the worst, most disgusting word in the English language. Nothing meaningful or worthwhile ever came from that word. An average person doesn’t cure cancer, win Olympic medals, or become a movie star. What kind of a boring, uninspired life was I going to live if I was thought of as ‘average’ in any category? My brother could not have levied a greater insult than calling me average with the exception of ‘normal,’ ordinary,’ and ‘mediocre’.”

But I stopped. Like Portia, I found other ways to express my emotions and take control of my surroundings. Part of this was due to when I forced myself to throw up with two fingers down my throat. I don’t recall the circumstances of the incident too well, but I remember the horrid pain – the pounding sensation beating across my skull, and the feeling of acid burning in my mouth. Of course transition from unhealthy to healthy was a gradual process that involved much more self-discovery than just that, but that’s one moment I can clearly recall. 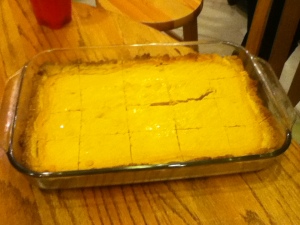 My aunt’s delicious pumpkin cheesecake which I annually devour. Hopefully everyone had a great Thanksgiving!

My struggle isn’t even an eighth of what De Rossi went through in Unbearable Lightness. In the book, she details her draining yo-yo diet, her multiple episodes of binging and bulimia, and how she nearly lost it all after whittling herself down to a mere 82 pounds. Her struggle to meet the expectations placed upon her by herself and her Hollywood circle was horrifying – thankfully, she also shares the story of her uplifting recovery, and her heartwarming romance with Ellen DeGeneres.

De Rossi’s writing wasn’t perfect. A better editor could have eliminated the few typos and unattractive sentences I saw. But none of that mattered, because her honesty and how she made her sickening struggle relatable won me over. I cringed, I sighed, and I nearly cried in the middle of a shoe store. She can actually write pretty well, as there are several powerful quotes I noted while reading. Here’s one that describes her insecurity and her distrust during her battle with anorexia:

“All the words Ann used were euphemisms for fat. Normal just meant that I was fat. Since when did anyone ever go to the doctor’s and feel good about being in the weight range that’s considered normal? A normal size for women in this country is a size 12. Models aren’t ‘normal.’ Actresses aren’t ‘normal.’ She may as well have told me that I’d just embarrassed myself in front of 15 million people.”

I suppose the real reason I love this book is because I can empathize with it so much. Ellen was right when she said that it would help a lot of people. No, I don’t know what it’s like to keep track of every calorie I eat or to starve myself to the point of collapse. But it’s wonderful to know that someone else – someone successful, gay, and happily married – survived it all and is still doing much more.