Here’s something you wouldn’t hear on the street without a few heads turning: I’m not racist, I just don’t think black people deserve to get married! Lately I’ve encountered several statements from various individuals – ranging from online posts to acquaintances in real life – that have offended me in a way akin to the example above. Here’s the definition of homophobia, in case anyone has forgotten.

Antipathy (noun): A deep-seated feeling of dislike; aversion. Example: I have an antipathy toward Calculus and cat-haters.

At least people who recognize their resentment toward homosexuals don’t deny their beliefs. Others, however, adopt a “holier than thou” attitude under the pretense that they actually accept gay people… for the most part. Allow me to share a few examples.

“I love gay guys and I totally support homosexuals, but lesbians making out in public or having sex grosses me out.” – straight, homophobic female.

“I’m gay and of course I accept gay people, but the gay guys who act so girly and feminine really piss me off; they’re just reinforcing what everyone else already thinks of us.” – gay, homophobic male.

“I don’t have a problem with gay people, it’s just that I think they shouldn’t have the right to get married. That’s my opinion and everyone deserves an opinion.” – religious, homophobic individual.

These quotes comes from various people, but they all have one aspect in common: they’re homophobic. No matter how much semantic manipulation occurs, if the layers of these words are stripped away, their true meaning emerges. If you have an issue with two women engaging in a romantic relationship, you still are homophobic, because that belief casts doubt on the nature of homosexuals having affection for one another in the first place. I already wrote a post about people hating on feminine gay guys, but in the end any feelings of ill will toward a certain segment of a sexual population still constitutes sexual discrimination – aka, homophobia, in this case. It’s like if someone were to say “I really dislike women who cook and clean because they perpetuate the stereotype that women can only cook or clean” or if someone were to say “I honestly hate Asian people whose favorite subjects are math and science, they’re just showing that Asians are so one-dimensional.” Prejudice is prejudice no matter how a person tries to justify it.

Marriage does not always indicate that a couple has a stronger commitment to one another than an unwed couple – however, the right to marry the person you love provides you with a basic human right that all deserve. By saying that gays shouldn’t get married, people imply that homosexuals are lesser than those who can. It’s not “all gays are going to hell” or “I hope all homos get AIDS and die”, but it’s still homophobic, no matter how it is twisted.

There may be a varying shades of sexual discrimination, but it is still homophobia, heterophobia, biphobia, etc. Sometimes these prejudicial thoughts sneak up on you; sometimes you can’t even tell you’re saying something bigoted. The good news is that the first step to fixing a problem is admitting you have one. And once it’s out in the open, all it takes to change is time and effort. 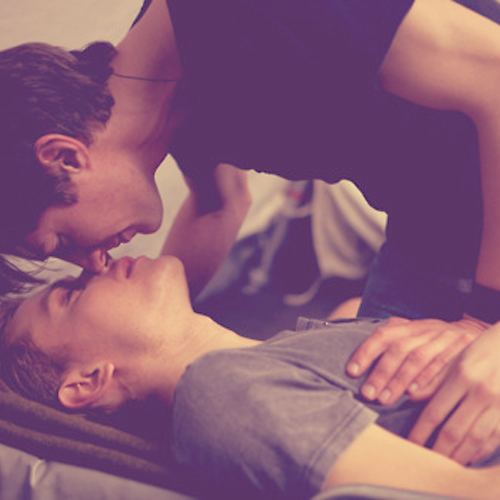 Brian Kinney and Justin Taylor, the one true pairing of Queer as Folk and all television. You know you’re obsessed when the romance between two fictional characters determines your mood. Image via potipelotas.tumblr.com.

Agree or disagree? Have you ever heard someone say something that wasn’t outright racist or homophobic but still had that heavy prejudicial connotation?

Now for some personal tidbits: high school ended for me yesterday, I’m officially graduating next Tuesday, and I’m almost finished with season four of Queer as Folk (out of five)! Expect that review/fanboying post about the show in a week or two, as well as more book reviews and other random posts. Now that summer is here I can focus on reading, writing, and commenting on society. Also, you guys should listen to “Same Love” by Macklemore if you haven’t already – I heard it a few months ago and was blown away, I’m so glad it’s finally getting time on the radio where I live! Hope you’re all well and I will write more soon.