A week ago, I came home from my first year of college. The night before I left I watched one of my favorite films, An Education, with one of my best friends, and I went to bed with a new motto in mind: fear, no more.

An Education‘s story centers on sixteen-year-old Jenny Mellor, a bright and hard-working girl who lives in the suburbs with her parents and dreams of studying English at Oxford. One day, while walking home from school in the pouring rain, she accepts a ride from a mysterious and charming man named David. After a couple of chance encounters they begin seeing each other frequently, with David taking Jenny to entertaining auctions, stimulating clubs, and Paris, the place of her dreams. I will not go into too much detail to avoid spoiling the movie, but one part of the film resonated with me, a scene that did not stick out the first time I watched it. After the climax of the movie, Jenny’s dad tells her about how afraid he is: afraid of Jenny not getting into Oxford, afraid of Jenny not having a bright future, afraid of Jenny struggling to make ends meet like he did.

In contemporary society, we let fear control so many of our actions. We go to school because we fear that without a degree, we will not get a job (hence, all the articles about which degrees will bring the most financial success). We engage in superficial relationships with people we might not like at all because we fear loneliness. All throughout my first year of college, I constantly feared not making an impact: was I doing enough? Will I get into graduate school with my grades and extra-curricular activities?

We do not need to eliminate fear, rather, we should use it to empower us. In one of my Education classes this semester, we discussed transforming fear from an “emotion of threat” to an “emotion of importance,” an idea from the Life Values Inventory. If you possess fear, there is probably an underlying passion or motivation behind it that you can use to push you forward. If you’re afraid of rejection from med school, that speaks to how important becoming a doctor is to you. If you’re afraid of a friend rejecting you, that might just indicate how much you care about this person. Knowing what we’re afraid of and why we’re afraid of it allows us to face fear with our eyes open, instead of fighting it blindfolded.

For the first 48 hours after leaving college, I felt like an emotional wreck. I said goodbye to the close friends I made, and I tried to prepare myself for three months of psychological warfare. Now, I accept that my fear of leaving my college – my new home – was a sign of just how much it means to me. Saying “see you later” just pumps me up for when I get to come back, and a break from school means an even better start to next semester. 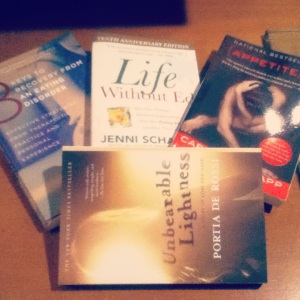 The books I’m reading for my mini-research project this summer! Tough stuff, but it’ll be worth it.

Thoughts or comments? Agree or disagree about fear acting as a motivator, sometimes as a detriment? Now that it’s summer and finals are over, I’ll have time to respond to comments on previous posts and the messages people have sent me. Also, if you’re interested, you can check out the abstract of the mini-research project I’m working on this summer – I’m reading memoirs of people who’ve dealt with eating disorders, analyzing them, and writing some creative fiction. Finally, if you want to check out my thoughts on The Bitter Kingdom by Rae Carson or Tuesdays With Morrie by Mitch Albom, you can do so here and here respectively. Hope everyone’s week has been going well so far and I look forward to hearing from you!