Sometimes I idealize people. Take for example, my most recent failed crush. When I read his writing, I thought, oh my goodness, this man is perfect, so this is the kinda guy Ariana Grande sung “Everyday” about. I later learned that this guy kinda sucked at in-depth interpersonal communication, or at least that type of communication to me. I had built him up in my head, my foolish, foolish head.

After this man and I stopped talking, I started to freak out about writing and my favorite authors. Wait a second, I thought to myself, if this man came across as such a talented, thoughtful writer yet actually treated me like a molded potato, how can I trust any writer to be a decent human being? As anyone who read this blog knows, I love books with all my heart, so the thought of my favorite authors treating people like dirt made me feel so hurt and gross. My brain spiraled: what if Min Jin Lee, who wrote the beautiful Pachinko, actually abuses her kid? What if Hanya Yanagihara, who wrote the iconic A Little Life, actually harbors explicit anti-black attitudes and/or sucks at texting back even when her friends need her most? What if Adam Haslett, my current swoon-worthy author crush who writes about interpersonal relationships with such attractive sensitivity, is actually single and interested in dating me (okay, I had to throw this positive one in just for the sake of variety, though it’s not actually gonna happen because I stalked his interviews and read that he has a partner, ugh)?

After about a day and several listens to BlackPink’s “Kill This Love” later, I came to some form of radical acceptance that writers are just humans, as we all are. Just because someone can write a pretty sentence or two, or 20, or 200, does not mean they know how to treat others well (e.g., Junot Diaz and his sexual harassment, though honestly, he wrote women pretty poorly in his books too). Sure, I might want to avoid generalizing my failed crush’s behavior to other writers whose work I cherish. And perhaps being an excellent writer may correlate to traits such as communicativeness, emotional intelligence, and engagement in social justice. But, ultimately, writers are humans too, and to idealize writers would be to deny them their full humanity, their capacity to both heal and hurt people.

Okay, but in all seriousness, is it possible that a mere mortal wrote A Little Life? I’m honestly not sure. Anyway, here’s a pic of Hanya Yanagihara looking like the iconic queen she is. Image via businessoffashion.com.

At a younger age, living in our capitalist, fake-meritocratic society, some part of me wanted to believe that that those who “made it” earned their accomplishments through hard work, that these people have more good qualities than bad. I wanted to believe that those who won awards, attained leadership positions, published books – that these people’s external accomplishments, especially if related to social justice, meant that they treated others well. But, in reality, when people win awards, or attain admission to prestigious graduate programs, or climb the nonprofit or academic or literary ladder, the power they gain often permits them to treat those with less power like dirt. As Min Jin Lee writes in Pachinko, “You want to see a very bad man? Make an ordinary man successful beyond his imagination. Let’s see how good he is when he can do whatever he wants.”

Certainly, some people who have achieved “success” worked hard and do have compassionate, selfless personalities. I believe that of my closest friends and mentors in positions of power, and I want to believe that of the writers and artists whose work I most admire. Now, though, I recognize the benefits of seeing people as they are – the way they portray themselves on the page, as well as how they behave off of it. I’m starting to forgive myself for not knowing to read both between and outside of the lines earlier. 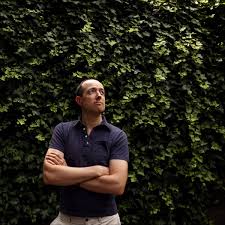 Adam Haslett is literally twice my age (he’s 48 and I’m almost 24) but like, how many other sensitive queer male writers do I have to choose from? Anyway, his arms in this picture and the nature behind him. Whew. Image via independent.co.uk.

Hello okay, the silver lining of April 2019 sucking so much for me is that the pain inspires a ton of blog posts, yay. I mostly wrote this blog post so I could continue reading books without feeling disgusting and distrustful. Has anyone else idealized artists or other people in positions of influence or power? How have you dealt with that? Thank you all for putting up with my blog posting healing process. Writing, along with spending time with friends, playing tennis, sending that man one final message, going to therapy, etc. has been good. Until next post.