Over the past few weeks my PTSD symptoms have flared up fierce. Thoughts about losing control of my life and relationships run around and around in my head, I play back scenarios I starred in and emails I wrote and wonder if I should have done something different, I have horrible nightmares all the time, like one about a lion chasing and eating me on the street of my childhood home.

Today, PTSD struck me hard. I attended the first day of a Psychology conference in sunny San Diego. In the morning before the conference, I jogged around the neighborhood of my Airbnb to BlackPink’s “As If It’s Your Last,” my favorite summery hopeful bop. But when the conference started my PTSD intensified. I had a couple of conversations surrounding some recent tenure track job openings in the hottest Psychology departments in the country and I wanted to drown myself because wow, my heart is still really torn up and though I care about helping others and mentoring students I could not care less about tenure track jobs right now even though I know I am so freaking privileged to be at this Psychology conference ugh make it stop. Then I talked to a friend about this cute guy I saw at the conference which made my brain do somersaults because then I started thinking about the cute guy I actually want, the one who tore my heart up. Then I went to this dinner with other graduate students, and while I liked the kindness of my fellow students and the food at this Vietnamese place a lot, the small talk – something I already struggle with – made me want to go home and journal about my emotions nonstop while listening to moody songs from Ariana Grande’s thank u, next album.

So, I did. I called a ride back to my Airbnb, scrounged up my laptop from my bag, sat on the living room couch and played “in my head” and then “imagine” on repeat. “imagine” really did it for me, honestly. In that moment, literally less than an hour and a half ago, when I listened to “imagine” for the first couple of times, I felt like the song wrapped my heart in the most gentle and full-bodied hug. “imagine,” about Ariana’s deceased ex-boyfriend Mac Miller, is a reflective song about her denial of their failed relationship. It is yearning, nostalgic, hopeful, sad, and tragic all at once. As a therapist, I most love “imagine” because of how freaking complex the emotions are that Ariana conveys in the song. It’s so vulnerable, so raw, so messy – just like me sitting on this random couch in San Diego, crying while journaling in my Word document about my torn up heart and how I hate living in a patriarchal society and how I wish I could be reborn in 3019 when men are less toxically masculine but the world would be destroyed because of climate change then anyway.

When I listened to “imagine,” I felt seen. I felt understood. I felt not alone.

So that’s why I’m writing and sharing this post. It’s not particularly insightful or well-written. But it’s how I’m feeling, right now, sitting on this couch with my pink earphones still in and my laptop cradled on my thighs. I hope that it helps someone else out there who’s struggling with mental illness, or just tough life shit, know they’re not alone. 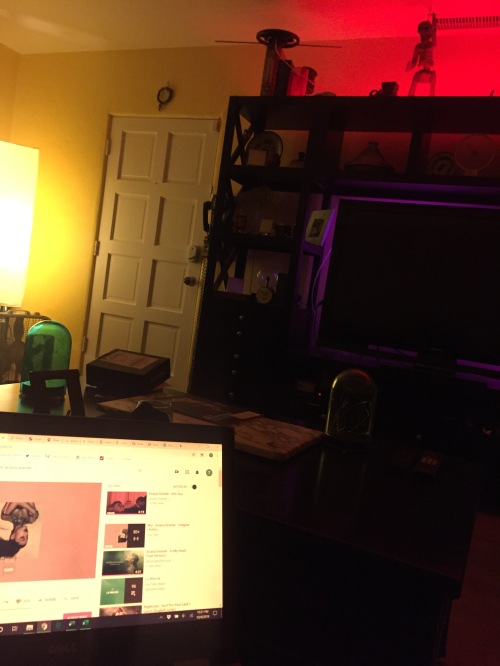 A picture of my laptop and my Airbnb and the album cover of thank u, next. Have I also had an ex-boyfriend who died or even an ex-boyfriend? No. Have I experienced a lot of grief and yearning and hope and sadness and despair? Yes, and I’m grateful to Ari for seeing me and those emotions.