I hold a lot of cynicism toward romance. Given the state of masculinity in 2020, I tell everyone I will not find a dateable man until 3019, several reincarnations down the line; I roll my eyes at every engagement and wedding post I scroll through on my Facebook feed; I bought a book about single parenting to prepare myself for single fatherhood because I refuse to put my life on hold for a man. I feel like I must have pushed the person with the solution to destroy white supremacy off a balcony in my past life, because like, what else could I have done to deserve being attracted to men.

Then I encountered AWLOB in late 2018. Through an intense flurry of emails, I started to develop some feelings for him – he cared a lot about social justice, seemed kind of all over the place in a hot way, and looked cute. Yes, he posted on Reddit to try to resolve his relationship issues, and yes, he broke up with his boyfriend and refused to communicate with me afterward without an explanation, but at the time I ignored those red flags. Then in mid to late 2019 I realized I deserved better and moved onward.

I enjoyed a few months of living crush-free, spending time with close friends, reading books, and playing tennis, until I met a new guy in late 2019. While AWLOB came across as a hot mess, this new guy carried such a sweet and thoughtful energy. Also, he looked absolutely gorgeous, and when we video chatted, I swear to God my breath actually stopped for a second when he took his glasses off and exposed his beautiful eyes. His eyes actually ended my autonomic nervous system for a moment, I swear it. Though we had a wonderful conversation and several long text exchanges, I realized I had to cut off communication with him when I learned about his boyfriend who I still think I’m better than lol because I know my worth and I’m not gonna spend time on someone who will drunk text me at 3am in the club, yet not commit to me in the way I want him to.

Second guy texted me this picture in a club, said he thought of me after listening to Ariana’s song “Break Up With Your Boyfriend.” Oh, the irony of how 1) I had wanted him to break up with his boyfriend and 2) he got the song title wrong, because it’s “girlfriend,” though I guess we all Freudian slip sometimes.

The similarities between these men feels wild: both Asian, both in their late 20’s or early 30’s, and both of their names start with the same two letters. I don’t want to expose them though honestly, they’re both blessed that they even received more than two seconds of my time, so hypothetically let’s say their names both started with the letters Ar, like Arman and Arvin. In therapy and with my closest friends I’ve started to joke that, though neither AWLOB or this second guy worked out, in 2021 a new Ar man will come into my life.

I half-joke that in 2021, I’ll meet Armadillo, a gay Asian Australian firefighter who specializes in direct service work that dismantles environmental racism and saves the homes of families of color from destruction by flame. Then, in 2022, I’ll run into Armander, a professional gamer named after the Pokémon Charmander, who acts as a leader in the movement to end sexism and homophobia in the gaming community. In 2023, Arpink will bump into me at a BlackPink concert and spill his beer all over me, which will lead us into a scintillating conversation about how life mistakes can manifest into simmering opportunity. I’m unsure how these potential men will turn out, and for now I’m okay with that.

I guess my point is that I’m open to meeting someone in a romantic context though I invest literally no stock in it. I’m iconic, my life is complete with meaningful relationships and community, and I can imagine a super happy existence for the rest of my time on earth with no man involved. At the same time, these two guys have helped me see that it is possible a man may exist who could interest me. While I’m sad that neither AWLOB with his social justice passion nor the second guy with his sweet vibes and beautiful eyes worked out, I’m proud of myself for opening up, if only briefly, to these men – and then reclaiming my time and moving forward when necessary. 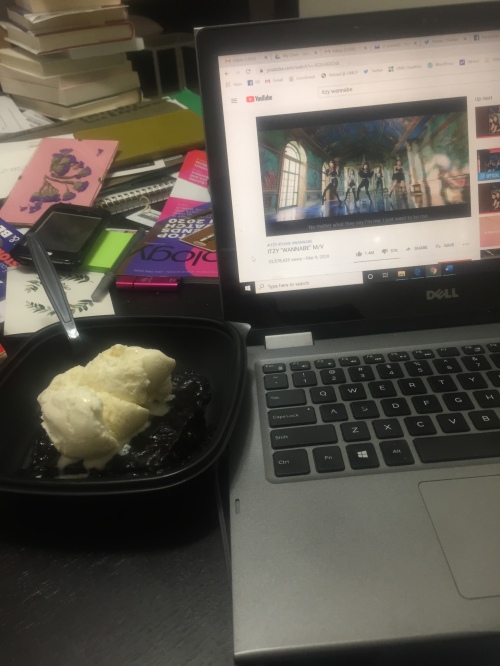 Ya’ll I had the roughest day today so here’s a pic of me eating a brownie with ice cream while watching Itzy’s music video for their iconic song “Wannabe,” which has single-handedly maintained my hope in my life prospects.

How have you coped with ex-crushes, ex-romantic partners, or general exes (e.g., friends, family members, etc.) who occupied a space in your life, for however fleeting, and then did not work out? What reactions or feelings did this post elicit in general? Why is it that “Wannabe” by Itzy is so iconic that I’m probably gonna reference it in all of my blog posts for the rest of the year, if not for the rest of the decade? I’m feeling a bit tired right now so I’ll respond to comments from my previous post probably tomorrow. Until next time!