Sometimes I behave like a hot mess. For example, I have a few regrets about how I handled the AWLOB shenanigans of 2019. He messaged me, we started talking, I developed a crush on him, we stopped talking, then he messaged me saying he broke up with his boyfriend and had a crush on me and needed space to heal from his relationship ending. Looking back, it’s clear what I should’ve done: accept that he’s emotionally unavailable at the time, wish him the best in his healing process, and give him space while moving on with my life.

Instead, I literally messaged him three separate times across the span of six months. I remember sitting in my office in March 2019, trying to study for a biopsychology exam and failing because I felt so bored by axons, neurons, and synaptic clefts. I thought to myself, Thomas, what you clearly should not do right now is Google AWLOB’s actual name and feed your desire for this man. So, of course, I googled AWLOB’s actual name, found one of his essays, read it, obsessed over his beautiful writing and vulnerability and self-reflection, and messaged him telling him how much I loved his essay.

I judge myself a decent amount for my desire for him. Like, one, desiring a man is so much less interesting than any other facet of my life, including dancing to Itzy’s “Wannabe” while brushing my teeth in the morning. Two, I should have left him alone. Just writing about how I messaged him last March makes me cringe and want to throw on a pink blanket and then hide under my couch for the rest of eternity.

When I practice self-compassion, however, I recognize that I did the best I could at the time. First of all, if I were to have a crush on any man, it would be him: he’s a pretty solid writer, he’s into social justice, he opened up to me beautifully and vulnerably. Also, I literally had just never met or felt as intensely toward any man as I did toward him – like, he was the first though not the last, lol guy who wrote me ten paragraph messages about his family, organizing, and love life. Also, though I loathe to admit it, he was cute and I wanted to know what he tastes like. 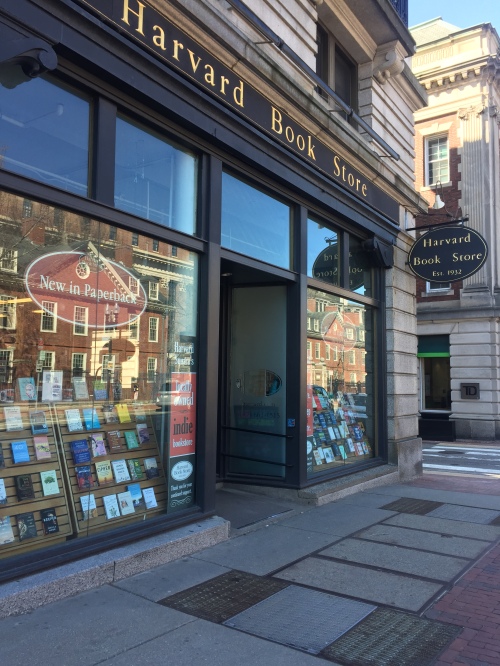 A pic of one of the bookstores I visited in Boston before social distancing intensified! While I have learned now that men who go to prestigious schools like Harvard are in no way actually more emotionally intelligent, social justice-oriented, etc. than other men, I still stan independent bookstores.

Eventually, later last year, I cultivated the strength and self-preservation to move on though I did send him a pretty mean message about leading me on and proceeded to burn one of his essays with one of my best friends while dancing to Ariana Grande, but you know, whatever. Even then, I still wondered about him, like if he ever actually liked me, did he get back together with his ex-boyfriend, etc. Though now, I am happy to report that I honestly don’t care anymore. While I still find what I know of him attractive and would potentially be curious to taste get to know him if he ever did the emotional work, I’d also be totally fine knowing that he never actually liked me, that he’s dating someone else, or that he was actually just three chihuahuas in a trench coat learning how to navigate human relationships by playing with my heart.

I guess my point with this blog post is that it’s never too late to grow and to heal and to change for the better. There are more substantial things in my life I wish I had accomplished sooner, like going to therapy and working through my trauma, or politicizing and radicalizing myself to fight for social justice. But I literally didn’t know how to access therapy as a queer Vietnamese American teen trapped in my abusive household, and no one ever taught me about organizing and advocating for social justice until I myself opted into that content and those friend groups in my late teens and early twenties.

I reflected on this a lot the other day while I provided therapy through phone check-ins while sitting in my apartment. I felt so moved and inspired by my clients’ resilience and progress in the face of devastating adversity. I felt proud of myself, too, because around a decade ago I still struggled with how to process my emotions in healthy ways, assert myself through direct communication in relationships, and understand how my parents influenced how I behave. Now, though, while I have more to learn as a therapist, I am confident in my capacity to guide others to guide themselves through challenges of all sorts related to emotions and relationships and family. As a teen I didn’t know where life would take me – through years of therapy, one painful friendship and several iconic ones, a dramatic hair color change – yet I’m happy where I am now. I still have many ways I want to grow and I know it’s never too late to do so.

This is the beautiful lake I run around every day or every other day. Over a decade ago I used to workout to maintain a certain weight and body shape. Now I do it because it feels good for my body and so I can have the energy to stomp on the face of the white supremacist patriarchy. Ah, progress.

What areas have you grown in over the past decade and how do you want to continue growing? How do you make space for emotions like regret that emerge when you think of your past? How did I develop the audacity to write that I want to taste a man on the internet? General reactions to this post? Until next time, ya’ll.

7 responses to “Never Too Late”