Review of SNSD’s “The Boys”

I’ve said this before, but SNSD is the one girl group that everyone loves . I think they get the most attention out of all the girl groups, even if they aren’t necessarily the best girl group out there. Due to their ultra-popular hit “Gee” followed by a string of successful singles the name “Girls’ Generation” has been solidified in the K-Pop industry and rookie girl groups will always try to live up to the standard of SNSD. Yes, if one were to name the five most well-known girl groups you would probably hear “2NE1”, “Wonder Girls”, etc., but SNSD would definitely be mentioned. Definitely.

And now they’re taking over the world. 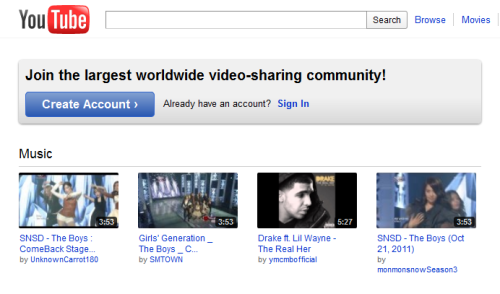 Okay, not really. A myriad of SNSD fans (and anti-fans, I suppose) were upset that SNSD produced an English version of their single “The Boys” (Korean video here, English video here). I understand that it seems like a wasted effort for them to spend their time promoting in a country where many, including their biggest followers, believe they won’t succeed – however, at this point, SM has simply released an English version of “The Boys” worldwide for others outside of Korea to purchase and listen to. They haven’t taken over the world. Yet.

When they promote (or if they promote) I think that “The Boys” will be a great song for them to start out with. Can you imagine them singing “Oh” or “Gee” to an American audience? They wouldn’t be chased away with torches and pitchforks, but I don’t think the response would be very warm either. “The Boys” offers a unique blend of K-Pop and a more westernized sound – courtesy of Teddy Riley – and shows an edgier side of the girls without taking them over the top.

Hyoyeon kills the bridge of this song. Kills it.

I was happy upon first hearing the English version of “The Boys”. I could discern most of what they were saying without reading the lyrics, and for a nine-member girl group with only two members fluent in English, that’s pretty impressive. Yes, their accents are easily identifiable, but that was to be expected – hopefully by the time they begin real promotions they’ll have the kinks ironed out in their pronunciation.

As for the song itself, I like the verses, love the bridge, and am lukewarm regarding the chorus. The verses allow the girls to display their improved singing abilities, the bridge has a crazily catchy beat, but the chorus feels more like a chant than something you would catch yourself singing in the shower. To me, it takes away the momentum the verses build and sends the song in a simple direction as opposed to taking it above and beyond. Still, “The Boys” does not disappoint – I give it a thumbs-up.

I honestly expected at least one of the members to mess this move up during their live performance - I guess my expectations of SNSD are too low!

I can’t say I have a preference between the music video or their live performance (live performance, here). While I appreciate symbolism, the random bird at the beginning of the video did not actually represent anything meaningful, so besides that I thought Teddy Riley did a decent job with it. To me the live performance brings out the girls’ voices during the verses more so than when one watches the video – in both, the middle eight is spectacular.

On a random note, one thing I would like to know is why SM removed the English version of the video from their channel – if Youtube had featured that instead of the girls’ live performances maybe more people would have gotten the song stuck in their head. I guess I should be thankful Youtube promotes K-Pop at all… unless they promote SHINee, because then there would be too much competition for Key. Although I could easily eliminate other fans by… I’m kidding. Kidding.

What do you think of “The Boys”? This song seems to have a wide range of positive to negative reviews, so, as always, I’m curious!

Believe it or not, I do do things besides reading and pondering pointless subjects such as “gesturing” vs. “gesticulating” and Key’s hotness. One of those things is exercise.

I’m not a serious athlete, but I do like to play tennis or run every day to keep myself from becoming morbidly obese. While I’m running on my treadmill or utilizing other calorie-burning equipment at the gym, I always listen to pop music and sometimes study SAT vocab. As a result, I’ve decided to compile a list of ten songs that I’ve been working out to lately or songs that I find energizing and upbeat.

Overall the list is comprised of some songs with more than one contributing artist and songs by mostly female singers. You can’t blame me, the pop industry has been dominated by women lately… now for thoughts on each individual song and images!

1. “You Make Me Feel” by Cobra Starship (feat. Sabi) – when I first heard this song on the radio I knew I would be running to it. It’s a catchy club song that actually doesn’t contain any curse words or overt dirty innuendos, how surprising (in a good way)!

2. “Good-bye Baby” by Miss A – As of this moment “Good-bye Baby” is number six on the top 25 most-played songs on my IPod. It has a strong rhythm and smooth transitions that make it easy to listen to. I ran to this song a lot while on my cruise this summer.

5. “Super Bass” by Nicki Minaj – I admit that I’ve been harsh on Nicki Minaj on the past, but the censored version of “Super Bass” and “Fly” (feat. Rihanna) impress me. Maybe because they lean more toward pop/dance than rap. 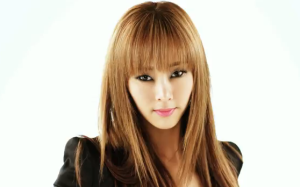 I hope they're still releasing the video for "Banana" despite it being banned from live performance.

6. “Banana” by G.NA – “Banana” possesses a mellifluous melody coupled with an exotic feel. I’m looking forward to writing a post about the song and its music video so I can discuss the differences between Eastern and Western pop music censoring. Lipstick chicken butter roll.

"Til The World Ends" won Best Pop Video at the 2011 VMAs. Do you think the video deserves the award?

7. “Til The World Ends” by Britney Spears – Slick and sexy, this song and its remix are fantastic to run to.

8. “Mr. Simple” by Super Junior – Oh, how I love Mr. Simple. While not the perfect song on its own, it does offer a mix of catchy components that can satisfy one’s craving for K-Pop while working out.

9. “Promiscuous” by Nelly Furtado (feat. Timbaland) – I rediscovered this song a few weeks ago at my friend’s house. I love the banter between the two, their allusions, and the overall feel of the song. Not to mention that I learned the meaning of “promiscuous” from it. Maybe I shouldn’t be so thankful for that… 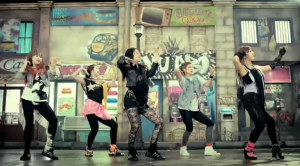 I love the dance to this song... when I saw Key perform it I almost screamed. Anyway...

“I think I’m ugly, and nobody wants to love me…”

So, like “I Am The Best”, I didn’t love this song at first listen. While IATB overwhelmed me, “Ugly” underwhelmed me. After hearing the song a few more times it grew on me, though not with the same intensity as “Lonely”, which happened to be shot in the same set as “Ugly”. The entirely English chorus impressed me despite some of the accents being off – it’s comprehensible and easy to sing along to. 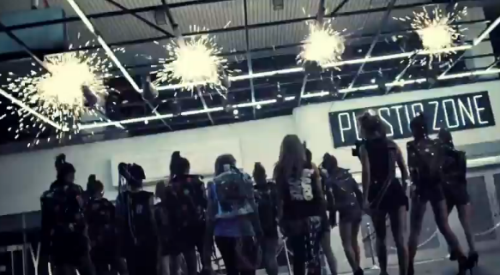 Minzy shattering windows, CL kicking down trash cans, signs that actually make sense, and explosions... what else could you want?

I wasn’t blown away by the music video, but I liked it. Its storyline is simple and understandable, which is quite a feat considering a few of the recently released K-Pop music videos. The contrast and inconsistency between “I Am The Best” and “Ugly” is lessened by the MV because it shows 2NE1 still being their unrestrained selves. 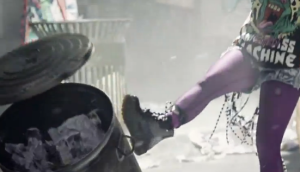 Can anyone count the number of kicks in the video? One... two... seventy-nine...

I loved their live performance of “Ugly” (here’s the link). Their utilization of the stage as well as the constantly flowing choreography kept what could have been a potential disaster afloat – 2NE1 seems to be enjoying themselves as always and their boundless energy showed. The fan chant proceeding the final chorus gave me chills the first time I watched the performance.

Dara doesn't look like a super attractive and sexy model!? Could it be that she is trying to appear *gasp*... ugly?

What is your opinion of “Ugly”? Be it the song, the music video, or the live performance?

I’m not an avid fan of 2NE1, but I love their song “Lonely”. It’s powerful and poignant, stripped bare rather than bombarded with auto-tune, and the minimalistic use of only the vocals and a guitar accentuates the sheer solitude of the song. Quite a contrast from “Can’t Nobody” and “I Am the Best”.

The music video works well, too. Besides that they all appear gorgeous and glamorous despite their melancholy, one thing that stuck out to me was that they weren’t actually alone, at least physically. They were surrounded by people, especially in the first portion of the video. This elucidates the idea that you don’t have to be isolated in order to feel lonely – you can be enveloped among your family and friends, but even then they may not be able to understand what is making you feel so alone.

If you haven’t deduced it at this point, yes, I have been feeling a little lonely lately (internet hug for triple alliteration, anyone?). I’ll save the topic of loneliness for another post, but I will say now that “Lonely” exemplifies something I love in K-Pop. Though I don’t know more than half of what they’re singing because I can’t comprehend Korean, I can feel the desolation and forlornness within the song as well as the music video.

From what I’ve gathered through translation sites, “Lonely” is about a girl who’s heartbroken over a guy*, or something along those lines. But to me, because I don’t speak Korean, the song isn’t just about loneliness on the romantic level, it’s about loneliness in general. That may be considered cheating, but isn’t that the point? To take away your own meaning from the music to fit you, the listener?

So that’s one reason why I listen to and adore K-Pop – some songs I utilize as workout music, but others, like “Lonely”, or “Replay” by SHINee, can be perceived in different ways based on the mood I’m experiencing. I realize that that can also be done with American pop music, but it’s easier when you don’t understand what the singer or group is saying at all.

What do you think of “Lonely”? Do you agree or disagree with my K-Pop listening method?

Thank you to Simon and Martina for pointing out "Sexy, Pin-Sharp, In Flawless" and the speed limit sign... 85 MPH, anyone?

*EDIT: My Korean friend revealed to me that the song is actually about a girl who feels lonely despite being in a relationship with someone, which makes me appreciate it even more because it pushes the point of not being physically alone, but still lonely.

Tagged as 2NE1, can't nobody, i am the best, loneliness, lonely