I stayed up until midnight reading this, and proceeded to finish it the next morning. I was in a state of shock – my friends might have called it an Alec and Magnus induced fan boy craze. More on that later.

In an attempt to organize my thoughts as opposed to letting my fingers run rampant across the keyboard, I’ll split this review up into two sections: why you shouldn’t hate this book, and why you should love it.

Why You Shouldn’t Hate City of Fallen Angels:

This part of my review is unnecessary – however, I feel obliged to write it, as I’ve read criticisms of this book and Cassandra Clare that make no sense to me whatsoever.

1) Cassandra Clare only wrote another book to make money: Wrong. I’m a bit offended when people say things like “yeah she intended it to be a trilogy and now she’s adding more books so it’s obviously for more money” – nope. One, I doubt any of the people assuming that money was the motivation for this installment actually know Clare personally. Two, she states directly why she wanted to write more for the Mortal Instruments series on her website. Nothing money related. I’d post an excerpt, but it would use up too many words.

2) There’s too much drama! Too much pointless conflict! Too much etc.!: Uh, sure. The point of Cassandra Clare writing another addition to the series is to further develop the conflicts/loose ends of City of Glass. Obviously, new villains and obstacles are going to arise – how else would the story be kept interesting? I feel like if Cassandra Clare originally said that The Mortal Instruments was going to be a six book series, no one would be complaining. It’s not like the books four, five, and six are going to lack the amazing aspects of the first three books – in fact, they should augment them…

Why You Should Love City of Fallen Angels:

1) New characters and story lines: Well, I can’t say too much about this one without spoiling the book, so… some spoiler-free plot tidbits include Simon’s struggle as a vampire, Jace and Clary growing apart for some unknown reason, and Shadowhunters being murdered. What’s not to like? (well, besides the actual struggling, growing apart, and murdering) Readers meet Kyle, a certain character Simon meets (can’t divulge more without spoiling) and Camille, who isn’t exactly new, which brings me to my next point…

2) Old characters and story lines: Probably the most prevalent reason why readers are returning to this series – they want to see what happens to Jace, Clary, Alec, Magnus, Isabelle, etc. The best part is that these characters do develop internally as well as externally as they face new trials and tribulations. My point with Camille is that Clare includes some references to Clockwork Angel into this book, mentioning specific characters like Camille and Will.

3) Romance (aka, Alec and Magnus): I’m kidding. Jace and Clary and Simon and Isabelle/Maia are cute too. Kidding again – Jace and Clary are scorching, especially with the way Clare describes them. And the descriptions of Jace’s hotness are far from over, just to let his fangirls you know.

Ultimately, my one favorite thing about this book is Alec and Magnus. Yeah, I mean it when I say I feel as if these two could be one character – in a good way, of course. If you didn’t notice my status update proclaiming my love for Alec, well, I’m telling you now – I love him, and I love them. Alec and Magnus as a couple are perfect, I’m not sure if there are any other gay pairings in the young-adult genre that could compete with them. Alec individually is definitely in my top five characters of all time, and he’s only a side character. Though it doesn’t feel that way, due to Clare’s splendid characterization.

Thus comes an end to my crazy review/rant/commentary on City of Fallen Angels. I liked this more than City of Bones, but not at the level of City of Ashes or City of Glass. As you can safely assume, I am already anticipating City of Lost Souls, the fifth book in the Mortal Instruments series. 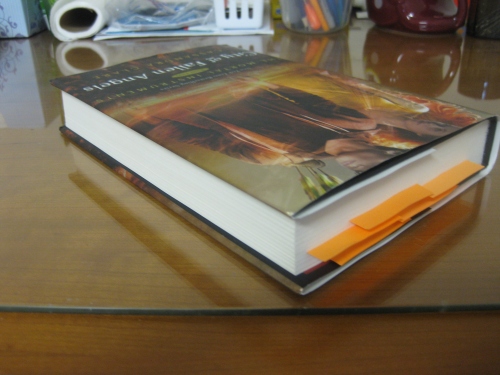 My compilation of Alec and Magnus moments via sticky note.