Oh snap, splashing around in some ankle-length water. Getting pretty satanic there...

You can watch the video here.

SM: We need to make SHINee more appealing to Japan.

SHINee’s Manager: But Taemin’s already gets 79% of the screen time.

SM: No, I mean the other members too.

SHINee’s Manager: So we should share the screen time equally among the members? That’s reason-

SM: I was thinking more of, well, how do I say this… think Siwon on the “Mr. Simple” cover.

SHINee’s Manager: Ah! So why don’t we have them frolic, I mean, dance, while getting each other wet*?

SM: I knew I hired you for a reason! Now only if we had someone to write lyrics for f(x)…

I swear, Key goes from the loosest pants of all time to the tightest... tights of all time in this video. Just look where his hand is.

… and then I laughed out loud again when I saw the Japanese PV of “Lucifer” for the first time.

Don’t get me wrong, I am a fan of SHINee. “Lucifer” in Japanese sounds awkward though. I’m not sure whether it’s its choppiness, or how alien-like it sounds, or maybe it’s simply the stress in my everyday life that made me react so strangely to it. It doesn’t possess that “bad—” factor that the Korean version holds, and without that aspect of the song, it kind of falls flat.

I wasn’t wowed by the video either. It felt really redone and the quality wasn’t astounding. I didn’t dislike it, but I am eagerly looking forward to SHINee’s comeback in Korea. Whenever that will be.

Cue Exhibit C, the only reason I even bothered watching this video. Just kidding! ... sort of.

I apologize for the lack of updates again! I have a lot of more serious (and less serious) things to write about, but, you know how it is… homework. Homework. Homework. This was a really spur of the moment post, so sorry if I come across as condescending – definitely not my intention!

What do you guys think of the Japanese version of “Lucifer”? I would appreciate your opinion, whether it be on the song or the video.

*the sad thing is, this didn’t occur. They didn’t even get wet! Disappointing.

So I was actually disappointed with this video. I’m still a SHINee fan, but for some reason ever since their Japanese debut my dedication as a Shawol has slightly declined. Maybe it’s because they’re just re-releasing old songs or that their music video concept (five guys going after one girl) is getting overdone.

I’m not a Jonghyun bias or Taemin anti, but it seems unfair that Taemin has been receiving Jonghyun’s lines – it’s not like Taemin’s singing is bad, but the song just feels… off, without Jjong in his rightful position as lead vocalist. I understand that Taemin is popular in Japan and SM is trying to take advantage of that, but if you have one member that’s well-liked, why not make the other members favored as well? Besides, Taemin is already the central dancer during the chorus.

Well, now that that rant is done, I’ll move on to what I usually do when SHINee is concerned: Key fanboying! His singing wasn’t that bad and he had his moments in the PV, like…

At 0:18 and 2:15 Key does this move I call the "Key Claw". It reminds me of Lady Gaga. One smart Youtube commenter said that what he does at 0:18 is what he'll do to Jonghyun if he gets another girlfriend. Win.

At 1:19 you are a given a glimpse of Key's sexy yellow boxers and his flat stomach. If only the entire video was like this...

And at 3:20 you can view a nice profile of Key, including an interesting ear piercing.

What do you think of “Juliette”? Hit or miss? Is it better or worse than the original? Let me hear your opinions!

So I’m kind of conflicted on SHINee’s music video for their song “AMIGO”.

The overall outdated feeling of the video makes it humorous, in a good way. Looking back, it’s funny to see Taemin’s old haircut and SHINee dancing like beasts in funky sweaters. Another amusing aspect of this MV is that SHINee (five strong and capable guys) chases the backstabbing beast who stole their heart (a lone girl). And they don’t catch her until she’s cornered on the top of a building. Hm. 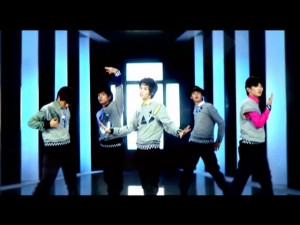 Funky sweaters for the win! (image via kojaproductions)

The song isn’t  bad either. It’s something I can listen to while I workout. If you didn’t already know this, they’re not referring to the Spanish “Amigo”, (as in, friend) but utilizing “AMIGO” as an acronym for the Korean phrase “Areumdaun Minyeorueljoahamyeon Gosaenghanda” (meaning: Heart Aches When You Fall In Love With a Beauty).

But the best part of this video (and the hottest part) is, in my opinion, Key. It may be just be my inner-fanboy speaking, but he exudes a charisma and confidence that isn’t shown by the other members. All of them are attractive, actually, despite how old this video is – possibly because they look more natural?

Back to Key. Although the way he enunciates “sexy” and his body language as he says it in the video seems more like a “oh no you didn’t girlfriend” type of thing, it’s still… sexy. And his rap is smoking too. This song exemplifies why SM should let Key rap more, as he packs quite a punch and would offer more variety alongside Minho.

Now that I think of it, why would anyone sane run away from SHINee? No wonder that girl had the impetuousness to steal Minho’s heart. She’s crazy. 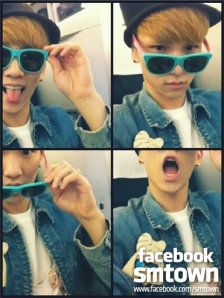