The Problem With Being Yourself

We’ve all been raised to be someone else. 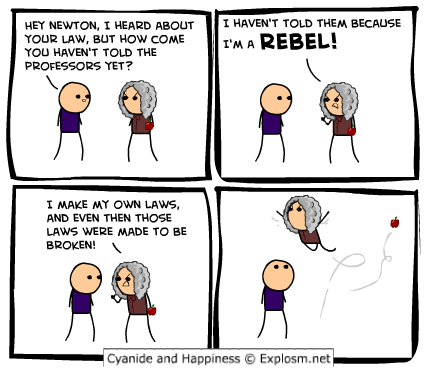 Newton was a nonconformist… I guess. I sort of just wanted to include a Cyanide and Happiness comic.

We’ve been raised that way for a reason. Many examples can be found in education. Stay quiet, obedient, and unmoving, unless you’ve raised your hand and have been chosen to answer a question. Study the same material and think the way your teachers tell you to, so that you can be successful like everyone else. Don’t ask any difficult questions, don’t question the status quo, and don’t think about applying to the colleges that no one else aspires to attend, in order to fit in. From an early age we’re taught that being like everyone else and following the same, formulaic rules of society are the foundations of success. END_OF_DOCUMENT_TOKEN_TO_BE_REPLACED

Is Taylor Lautner Gay? Is Justin Bieber Really a Jerk? I Know the Answers! … Sort Of.

So, this is Taylor Lautner. He isn't, uh, bad looking, I suppose.

After locating some pictures of Lautner, it’s understandable why some people would spend time pondering whether or not he’s homosexual. I mean, despite the fact that almost all of his fans will never ever get to engage in a romantic relationship with him, or even be friends with him (sorry if I’m breaking hearts now), it’s fun to think about. Sort of how I like to think about how awesome it would be if I were to have friends.

But the thing is, it is impossible to deduce Lautner’s sexuality unless one were to ask him themselves. That goes for any celebrity, really. Even then, he may lie to you, but still – one can waste hours wondering if that glance at Robert Pattinson in “Twilight” was filled with hidden longing, or if that gesture he made in “New Moon” actually represented his repressed desires for men, or if the second letter of every word he said in one of his interviews secretly spelled out “I like boys.” And yet, it will forever remain a mystery, because his sexual orientation is only his business and does not affect his ability to act, sing, play basketball, or look sexy at all.

END_OF_DOCUMENT_TOKEN_TO_BE_REPLACED

Taylor Swift and “Sparks Fly”… Why Am I Single?

Ah, Taylor Swift. The princess of conventional country-pop music that everyone loves . She’s applauded for being ordinary and plain, which actually helps her image – her normalcy sets her apart from Lady Gaga, Katy Perry, Ke$ha, etc. No one can accuse her of plagiarizing other artists because not only is her style solely hers, but she writes all of her own songs, too.

Not to say that she doesn’t use other celebrities to her advantage. Just look at Taylor Lautner and John Mayer. Those two acrid relationships resulted in two songs (“Back to December” and “Dear John”) that ameliorated the track list of Speak Now. And I doubt anyone could forget the ignominious Kanye West incident, which backfired badly and even bolstered Swift’s popularity.

So am I a Taylor Swift fan? I’d say yes, because she’s a respectable artist and her songs can be pretty darn catchy. Though some of her songs, like “You Belong With Me”, and most recently, “Sparks Fly”, really make me regret not being in a relationship so I could truly comprehend the depth of her soulful singing.

“Drop everything now, meet me in the pouring rain
Kiss me no the sidewalk, take away the pain
‘Cause I see sparks fly
Whenever you smile”

In my opinion this is one of Swift’s best songs to date. Maybe not her best music video, but the song is great. It’s upbeat and commanding, sweeping you into Swift’s sentiment over a particularly pleasant guy. The lyrics are convincing and cute (Swift’s pronunciation of “sidewalk” gets me every time) and the song supplies a chance for her vocals to shine. The video, on the other hand…

It disappointed me. I’ve listened to “Sparks Fly” a decent amount of times since the album’s release and have come to love it, so I expected something more. Don’t get me wrong, the video is decent, but not as amazing as her previous productions. There was an inundation of cliche close-ups, pauses, etc. that caused the video to appear almost… sophomoric. 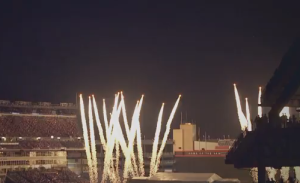 Ha, fireworks. Just like in the lyrics. How literal.

I’m sure I’m not the only one who would have preferred a poignant music video as opposed to one showing the concert experience. I’ve never been to a Taylor Swift concert so I can’t judge, but this lady found it lukewarm. Either way it would’ve been nice to see a more “Mine”-like concept due to the song’s strength and compelling quality.

But, I still like Taylor Swift and one average video definitely won’t hurt her in the long run. I think I’m going to go study now…

What do you think of “Sparks Fly” (the song or the video) and Taylor Swift in general?